Useless Solution started in mid 1998 following the break ups of two notable Halifax bands - Snot Party and Falling Out.  As was many of the punk and hardcore bands during this time, these two bands were inbred, sharing several members between them.  On the heels of the joke just not being funny anymore, Snot Party members Gerry Hubley and myself (Morgan Carpenter) came together with Falling Out members Nathan Doucet and Keith Porter.  The intent was to form a hardcore band that stood apart from what Halifax had seen already - drawing influences from the heaviness of bands like His Hero Is Gone and Acrid, to the intensity of emotional hardcore bands like Frail and Portraits Of Past, to the speed and precision of grindcore units like Despise You. 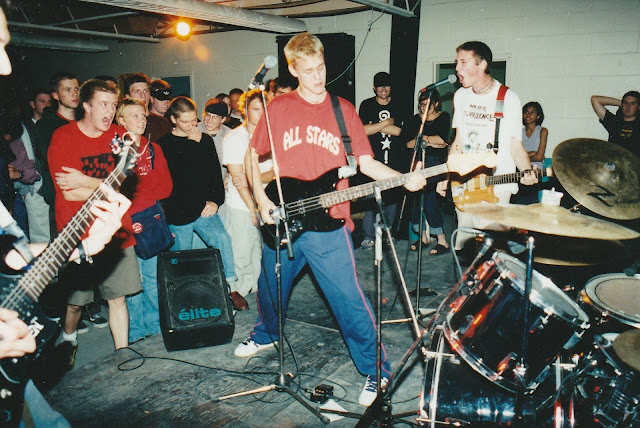 The original lineup of U.S. was unlike anything I had experienced as a musician to that point, nor during the subsequent 20 years of playing bringing us up to now.  The four of us gelled so unbelievably well.  There was an immediate connection when we came together, and a shared understanding of where we were going and how to get there.  Each member played a nearly equal roll in writing the music - so much so that in listening back to the first two cassette releases, I can easily tell which is a Morgan song, a Gerry song, a Nathan song, etc. 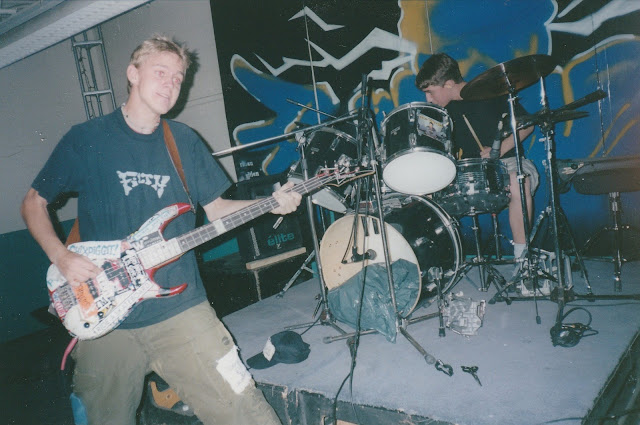 Shortly after getting our first batch of shows under our belts, we colluded with Jon Hut (of Equation Of State, Sebutones, Recyclone) to record our first demo.  Like both of our releases, it was nearly a full length of material, but because the only format that was affordable to us was cassette, the releases have largely always been referred to as demos.  The material was recorded via analog 4-track in our 5’x8’ practice room and released by Ant Records, our sound adding to their thorough roster of black sheep.  Upon listening back to the material now, merging influences of grindcore, emo, and experimental noise was a tasteful feat for a bunch of 15 year olds. 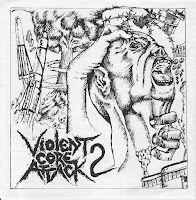 Later we would team up with Jon Hut again to record two compilation tracks on the borrowed equipment of famed hip hop artist Sixtoo, recording in several closets, apartments and basements around Halifax.  One of these tracks ended up on the Violent Core Attack Part 2 compilation 7” released by Simon Pare out of Montreal, and the second to an unreleased compilation out of North Carolina.


What would come to be the last official release of U.S. was the ‘March’ cassette, again recorded by Hut and released through Ant Records.  This time around we were heavily incorporating more metallic guitar playing, controlled oscillating noise, as well as experimenting with melody - as evidenced in covering a song by Halifax band By Any Means (originally written by Doucet, U.S. drummer).  The night after completing the tracking for ‘March’, the band performed a full live set on the long running CKDU radio show, 7200 Sloppy Seconds.  By the following morning, I had shredded my vocal chords so badly doing what was nearly a full day of screaming that it took the better part of a month for me to get my voice back.

After playing several great shows with both local and touring bands, the original era of U.S. quickly came to a close.  This coincided with an undeniable shift in the Halifax punk scene - arguably rooted in the growing popularity of Christianity throughout the scene, there was a noticeable divide that took place between bands and friends.  Keith decided to leave the band to focus his musical efforts of Led By Regret, whom he was currently playing guitar for, and was replaced by scene veteran Ian Hart.  With the addition of Ian, the song writing began leaning more metallic with songs getting longer and more complex.  With this lineup we made several small accomplishments, including having the opportunity to play Halifax On Music festival (which is what the Halifax Pop Explosion was known as briefly during that period).

Not long after Nathan also decided to leave and the band entered a long hiatus of trying to find a replacement. Eventually one was found in Gerald Smith (of Existench, System Shit, Sloth, etc).  I switched singing only, and Mike Day (of The Build Ups) came aboard on second guitar.  This lineup stayed active for the better part of a year, now fully incorporating much heavier grindcore, black metal and death metal riffing and song structure.

Eventually in 2001, Gerry and I (the lone two original members) admitted that the spark had gone out and the band had become to much work to keep tight and active.  We played our last show in March of that year and dubbed it “The Funeral” encouraging the audience to wear all black (a feat which now seems laughably second nature).  We opened our final set with a hap-hazard rendition of For Whom The Bell Tolls and included songs from the entirety of our existence, many of which that hadn’t ever been played by the current line up.  There were plans for a reunion show a year or two later but that never actually took shape.

Following the demise of U.S., Gerry went on to start The Shotgun Solution and Oh God, Ian kept up long running Envision and eventually started Risky Business, Gerald started Thy Flesh Consumed and I started Flesh Made To Suffer, as well as drummed for Envision.


As per usual, you can listen to the demos or download them!! 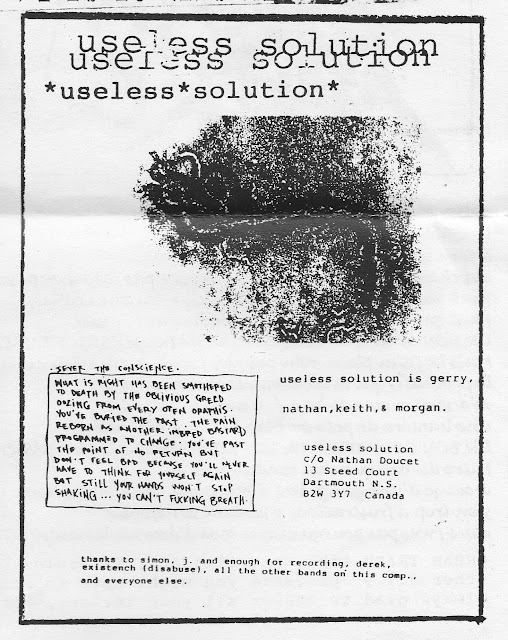