System Overload were a hardcore/punk band from Halifax, NS during the mid to late 80's. They were also the first punk band I ever saw live at a free outdoor show in downtown Halifax. As well, I got to see their last show in 1989. I recently got a hold of their singer John Vine for this brief interview that will hopefully give you a little peak into this under rated band that remains one of my local faves to this day!! 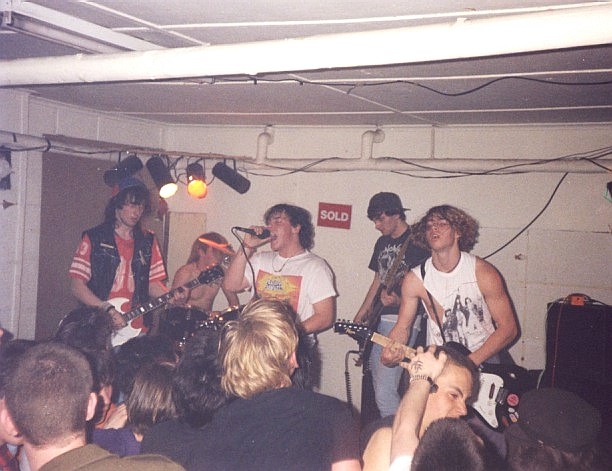 What years was the band around and who was in it?
System Overload was founded in Dartmouth, NS in the summer of 1984. Bjarni (Dave) Schandall and I founded the band (originally called Forced Submission) when we were in Ellenvale Junior High School. We were blown away by Black Flag, specifically the "Everything Went Black" record that had all the different Black Flag singers and all the ads for Flag shows in the early 80's. That was a huge inspiration for us to form a band. The original lineup was Bjarni (drums), myself (screaming) and a guitarist named Billy Coulter. Billy's two favourite bands at the time were Black Sabbath and the Forgotten Rebels, so he was in. Soon Johnny MacKenzie, formally of False Security, joined us on bass and System Overload was born. We played our first show at Veith House, a woman's shelter in Halifax, during the winter of '85/86. Unfortunately, after this gig, Billy and System Overload parted ways, but not long afterwards Leonard Woolley left STD and joined us. In 1987 Todd Calder joined SOL as a second guitarist to beef up the sound. This line up played together for several years. We played our last show in May 1989 at the Dalhousie SUB with a great Montreal band called Bliss.

Did you only have the one demo? I know there is a live set with songs not on the demo but were they ever recorded? Was there ever any talk of doing a 7" or LP?
Yes, the only official recorded document of System Overload's time together is the 1986 "Rocks Off" cassette. There is also a 1988 live recording of us playing at the CKDU TUNS festival. It's actually a decent recording and it captures most of the songs that we had written at the time which would never have been recorded otherwise. No, we never seriously discussed recording or releasing records. We were a gigging live band throughout the 80's, into playing shows and the tape trading scene, so records were not a big deal to us. 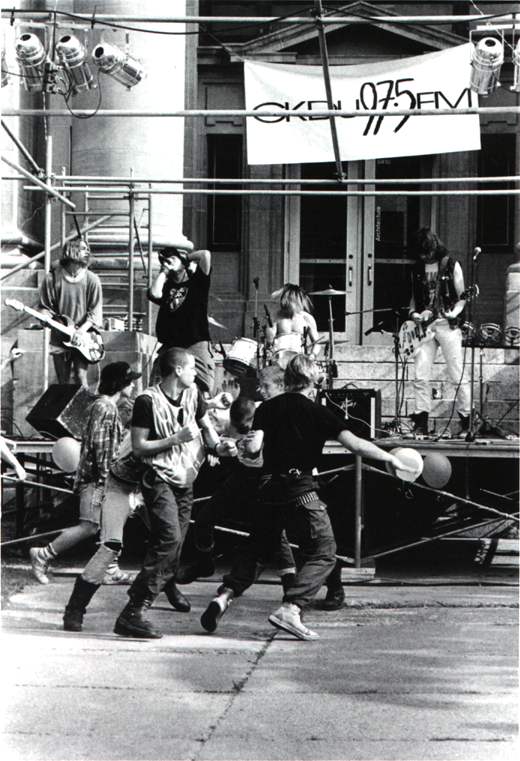 Did you tour much and if so where??
We did a fair amount of touring, playing all over Nova Scotia and New Brunswick. We had one (semi) serious tour that included NS, NB, Quebec and Ontario. Thankfully, we had the chance to play or tour with several great bands: Warzone (NYC), SCUM (Mtl), Problem Children (Hamilton), SNFU (Edmonton), Mallethead (ex-Gang Green, Boston), Neighbourhood Watch (Fredericton), Moral Support (Hfx), False Security (Hfx), Black Forest Cake Trade (Saint John), Killing Time/Burnt Offerings (Moncton) and many more.


Could you tell me about the show you played with Warzone? That is amazing!
We actually played a few shows with Warzone on their debut Canadian tour for "Don't Forget the Struggle, Don't Forget the Streets" in Aug./Sept. 1988 throughout Ontario and Quebec. Raybeez was very serious and supportive of what we were doing and was enthusiastic about us coming to NYC, which never happened. The rest of the guys in Warzone at that time were younger then Raybeez. They were having a blast being on the road. They were a riot! I remember they just tore it up at les Foufounes Electriques in Montreal, bloody great show.

What caused the band to end? What are the members doing now? I hear you are still doing music and have a band!
System Overload, like most bands, just ran its natural course. We were together for five years and accomplished everything we hoped to. By '89 we were all older, listening to different music and moving in different directions. I do believe it's important to recognize when something is over, although it can be difficult when all individuals involved are not on the same page. Thankfully that wasn't the case with SOL. In the 90's Johnny, Leonard and Todd had a great band called the Quahogs, with the late, great Scott Tappen singing. Bjarni became heavily involved in sailing after the band and has sailed all over the globe. I've been playing in bands across Canada for the last 20+ years, although I have slowed down over the last two years.

How would you compare the music scene back the to the way it is now?
This is a difficult question because technology has transformed everything. I think there are as many incredible bands out there today as there were back then. Networking is definitely easier for bands today. It's still nice to see a band piling into a van to venture into the unknown to bring their music to the people. Thankfully that hasn't changed over the last 25+ years.

Listen to the demo here:

Ian - how many lawn jams were there? I thought the one circa Out of the Fog was in 1987, and then there was another one in 1994. Any others?

I'm really not sure...i think there were a few in the late 80's but I cant say for sure