Slow Death were a punk/hardcore band from Summerside, Prince Edward Island circa 1984. Arguably, they were the first straight edge band in Canada and certainly the first punk or hardcore band from PEI. They released one demo tape in 1985 and did a small amount of local touring, gaining some moderate attention at the time. I tracked down drummer Dale Hussey for a look back almost 30 years in the past. 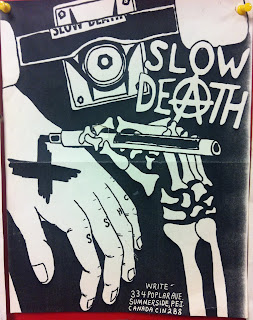 Basic starter question – who was in the band and how did it all start? What year would this have been?
The band was my brother Dan on vocals, Jeff Tarka on guitar, Steve Ellis on bass and myself on drums. Jeff was a longtime military base-rat buddy of ours and he was pretty good on guitar and Dan was playing some guitar too and writing songs. One day Dan decided to buy some drums and put me to work and that was the beginning I guess…we met Steve at high school and hit it off. This would be say 1984 or 83…fuzzy.
Tell me about what was going on musically in PEI at the time…were there any other punk bands around?
We were in our own world musically for sure…I guess there were shit cover bands and stuff around as well as school bands but we were the only punk band around…hell if it wasn’t for our military base friends we were the only punks around.
In Kill The Posers #1 zine (included in the demo download!) you say you were a straight edge band. How did you even find out about straight edge in PEI? Were there any other straight edge bands in Canada that you knew of? Were you the first??
We were born of boredom and frustration with what was going on around us…the booze guzzling townfolk and jocks were just doing their thing and so were we, but they really didn’t dig what we were doing so we tried to separate ourselves from them as much as possible. We were aware of bands like Minor Threat etc. but it was more a personal choice thing than anything…clear your mind. I had my fair share of alcohol and experimental drugs at a very young age.
You also mentioned in that zine you hadn’t made up your mind about anarchy…how do you feel about it now? Haha
Anarchy…hmmm well i’m not one to preach politics but i know when something is fucked. At the time, for myself, anarchy was more about being responsible for your actions and trusting people to make good decisions…didn’t always work out but i still try to live that way.
How important was the link between skateboarding and punk rock at this time?
Skateboarding was my link to punk rock and vise versa…no rules and no limits…just yourself. When I started skating I didn’t know what I was doing but it felt right…same with music. 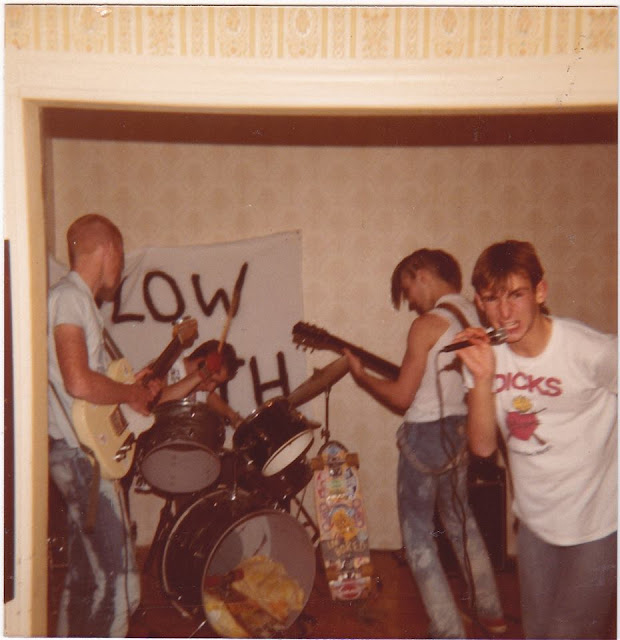 You released a demo tape. Do you remember anything about recording it. Once it was done, how did you get it out to the masses? Any idea how many copies of it you made?
A guy named Jim Streight recorded the demo with us. He worked at the post office and had some gear…he had recorded bands before and seemed interested in doing something different…Steve and Dan made the connection and so we recorded it out at the military base in place called the teen club which was just a hang out for the underage crew on the base…I’m pretty sure it all went down in a day and live off the floor…I dont remember overdubs of any sort…we were just stoked to hear ourselves because we really had no idea what we sounded like. I think i had been playing drums for like a few weeks at this point…haha
Dan was our distributor…any band we knew of and all the mags at the time were sent a copy as well as any radio show we thought might pay a listen. We use to stay up late listening to Brave New Waves on CBC and catch some cool bands being played and one night there we were going out across the airwaves…it was a trip. I do remember one review from MRR comparing us to the Minutemen and that was crazy to me…I loved the Minutemen! I forget how many copies we made – I think 500 rings a bell but Dan would know for sure. My only copy was stolen at a party at my place one night…still trying to get my hands on an OG version.
Did you get to tour around much?
Shows were mainly our basement parties or at friends’ houses…we did play a show at University Of New Brunswick with a band from the Boston area called Cancerous Growth and some local bands that we came to be good friends with. Steve our bass player had to bail very last minute and one of the bass players from an opening band that had heard our tape filled in on the spot…that’s punk! We also played a show at Veith House in Halifax as a 3 piece with Dan playing guitar and singing…everything else was random…we did get a call to play a show in Montreal opening for the Circle Jerks but our guitar player at the time was bound for the military and he bailed…ah well.
I know you went on to many other bands like Rebecca West…what else have you and the other guys been up to?
Dan and I also had a band here in Halifax later called Merge along with Kevin Lewis and longtime base buddy Paul “The Wookie” Murray which led me to Rebecca West and now I still jam with The Art Department(AndyMiller/Peter Boileau).Dan had a 2pc. band called Sanisoft for sometime here in halfax after Merge parted ways. I believe Jeff went on to his military career and I kinda lost touch with Steve…perhaps he is on facecrack somewhere…he was super smart and way more political than the rest of us…who knows!
That about sums up my life in high school and the first year I lived in Halifax with Slow Death. Maybe a 30 year reunion gig at the bowl should go down…I will keep you posted!!! 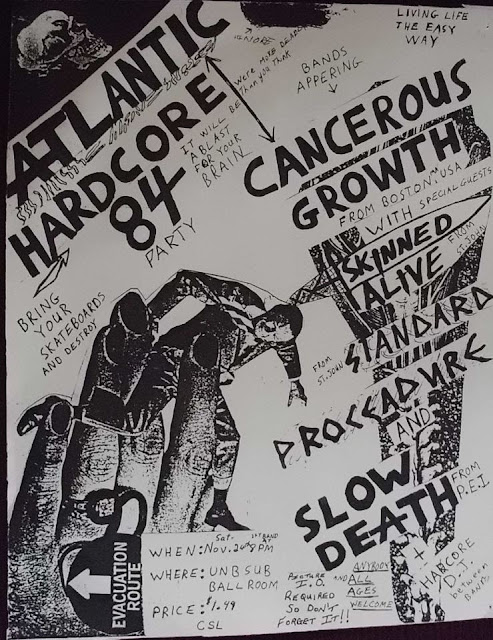 And of course you can download the demo (plus a show flyer and old zine interview) here:

or listen here:
Posted by Unknown at 5:58 PM

i would rather burn than bail

I grew up in Summerside right around the corner from one of the guys in Slow Death and very vividly remember going outside and sitting in the grass at like age 4/5 watching them jam and skateboard and shit. I jumped right into punk/hardcore as a teenager and never looked back to this day, thanks for fucking my life up hahahahahahh.