Spent were a Halifax band most notable for featuring Chris Murphy of Sloan. I first heard Spent on the local college station CKDU in the late 80's. The song was called Scapegoat and it was great...real Dag Nasty feel to it. I taped it off the radio and listened to it a lot but the band was a bit of a mystery to me at the time. I eventually figured out the Sloan connection but it wasn't until much more recently I was able to track down their full demo (which was never actually released). They were originally called Aware (whose one and only live set is now included thanks to Stephen Cooke!) and although they played very few shows and didn't really have a huge impact on the scene, it is an interesting piece of the puzzle that lead to one of Halifax's most famous exports: Sloan. In late 2014 I got in touch with Chris Murphy, who took the time to help tell the story of Spent.

Was Spent your first band?
My first band was called Wite Out - Marc/Mark (not sure which) Ducharme (vocals), Steve McCulloch (sp?) (guitar), myself (bass) and Mike Crosby (drums). Wite Out was more goofy/ironic than a lot of the angst-ridden local hardcore bands. We played a few shows in 1986 at The Bible Society and the YWCA. We played some covers (Question Authority - Circle Jerks, Gas Chamber - Angry Samoans, Trust - 7 Seconds) but we had a bunch of originals. We made very rough live recordings of our half dozen songs at our rehearsal space but we never had a release.

What influenced you to form Spent? Is there anything you can tell us about Spent’s brief existence?
After Wite Out, Steve McCulloch (guitar) and I (now guitar) formed Aware with another guy named Chris Murphy aka Zombie (vocals), Colleen Britton (drums) and Gordon Krieger (bass). Aware played only one show at The Club Flamingo on Gottingen St. in 1987.

We renamed ourselves Spent when Colleen left and I moved to drums. We recorded several originals at the Centre For Art Tapes but they were never released. Spent only played a couple of shows. We played at a place I rented on Robie near North Street that some called The Harmony House and I believe we played at the Dal SUB. This was 1988.

The music was more serious than Wite Out. The other Chris Murphy wrote the lyrics, which were personal/proto emo/Dischord obsessed. I would have been too self conscious to write that way. In my opinion, we were better than all the other strictly hardcore bands in town but we didn’t last long.

Was Spent a straight edge band?
I always thought of myself as straight edge. I don’t know if the bands would have considered themselves straight edge but it seemed no one drank except Colleen Britton. Chris Murphy and I and our friend Scott Kennedy went on what was essentially a pilgrimage to Washington D.C. in 1987 and again in 1988 with all of Spent, to soak up the city that had produced Dischord Records, Minor Threat and Straight Edge. We were pretty into it. In 1988, we saw what I believe was Fugazi’s 3rd show.

Was there any animosity from others about being straight edge?
My junior high friends called me Father Murphy, which was a TV show at the time. I remember being nervous that I didn’t drink at a party with people I didn’t know who were legit punks. 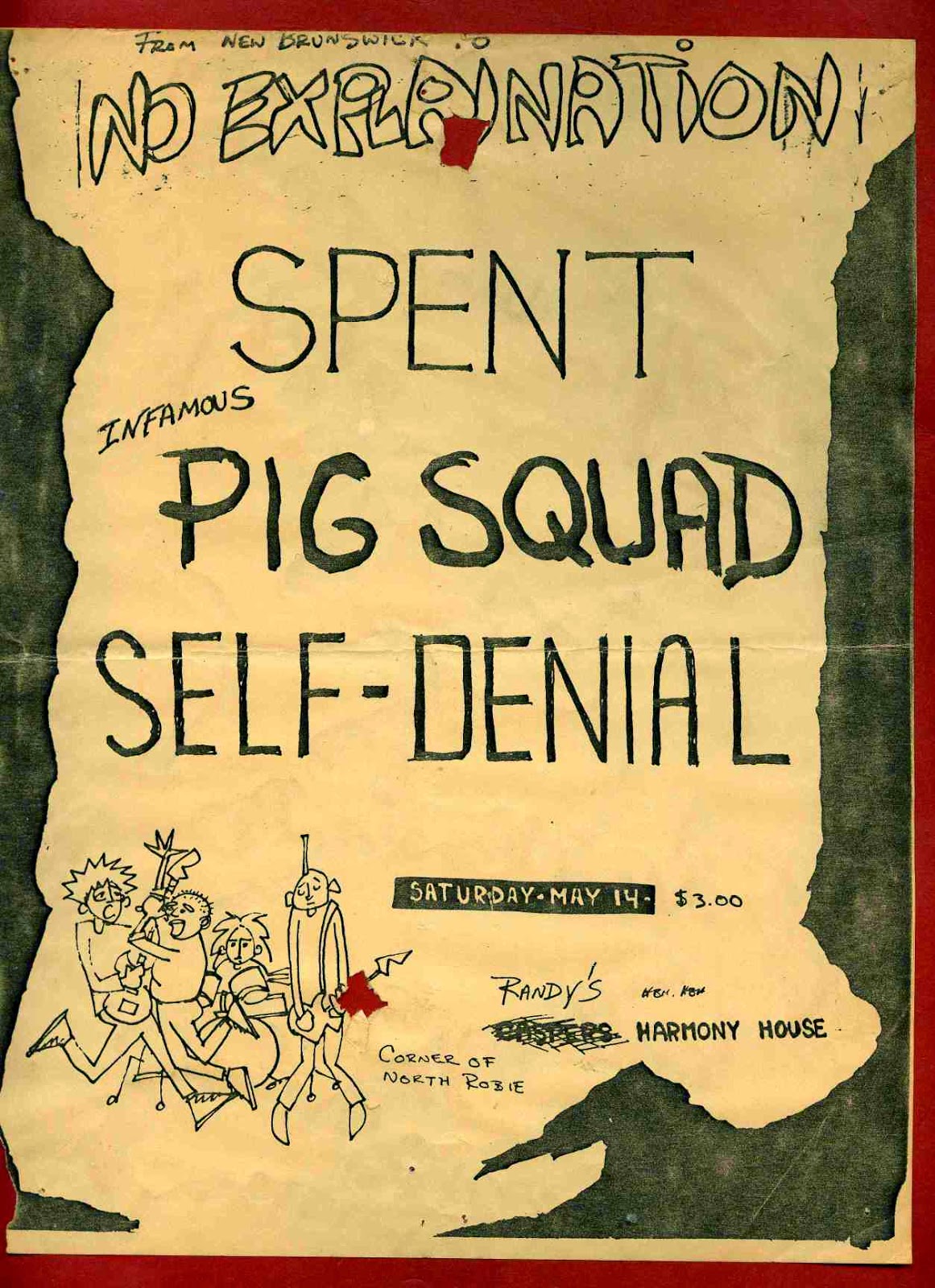 How did you meet up with the folks in Spent? I know the other Chris Murphy did a radio show on CKDU
I don’t know. I feel like I was introduced to that Chris Murphy at the Dal SUB but I can’t remember what was happening there. I’m sure we were introduced because we had the same name.

So after Spent did you start Kearny Lake Road right away? How did you hook up with Jay for that?
I had Spent and KLR happening at the same time in 1987/1988. KLR felt pretty un-punk. I felt goofy singing and my early efforts were extremely self-conscious. I put a sarcastic tone on my voice in case anyone thought I was trying too hard etc. KLR was pretty pop compared to Spent but I was forcing NoMeansNo type drumming over REM and 60’s riffs.

I worked at the VG Hospital with Matt Murphy (later of the Super Friendz) who had known Jay since grade 1. Matt introduced me to Jay and Henri Sangalang. We were all at Kings or Dal.

Interesting facts about the unreleased demo:
Track 1 To Each His Own
Track 2 Remains The Same
Track 3 I’ve Seen What Can Happen (??? not sure)
Track 4 Scapegoat
Track 5 Don’t Deal In Lies (??? not sure. Lyrics are from “If” by Rudyard Kipling)
Track 6 Simple Years
Track 7 “Dag Shag” unfinished instrumental

I feel like I wrote all of the music for tracks 1-4 and Steve wrote tracks 5-7. We were getting good but split up for whatever reason. I forget.

I want to be clear that all the guys in Spent played one show as a 5-piece called Aware at the Flamingo on Gottingen with Collen on drums and myself on 2nd guitar. Colleen was out and we changed our name to Spent. The demo did not include Colleen.

LISTEN to the demo
Posted by Unknown at 11:25 AM

Thanks for the nice write-up and for posting that cringe-inducing demo. :)

I haven't seen any of my former band-mates in over 20 years and this article brought back a lot of memories. Too bad we didn't last longer as I think we were coming at things from a different direction than a lot of other bands at that time.

BTW, I still have the original version of that poster somewhere.

Wow, so crazy to stumble on this. Hey Steve! Want to talk about cringe-inducing... I played in Self Denial!

Spent was one of my fave Hfx bands ever and a huge inspiration in my teenage Dischord obsessed years. So many great memories.

All the best,
Chris