The Chitz were a punk/hardcore band from Halifax, Nova Scotia and were around from 1994-1998. Drawing influence from a wide range of bands such as The Exploited, Agnostic Front and even Ramones-y pop punk, the band released an LP, split LP, 2 split 7″s and appeared on many compilations. They were considered one of the premier bands from Atlantic Canada at the time. As with most bands from that area, touring was difficult and they never received too much international exposure. Here is their story.
In the far off time of 1994, Derrick Hiltz and Mike Brygyder wanted to start a new band after the break up of their previous band The Shitheads. They enlisted the help of Cara Macdonald who had been in a band called Gorgonzola. They rounded up the lineup with Richard Lafortune who had never been in a band before but had done a zine and accompanying cassette compilation called Mass Turbulence. The band existed in this form for a year with Derrick on drums, Cara on vocals, Mike on bass and Richard on guitar. Richard was known for never having a D string on guitar which forced him to slide up and down the fretboard more the usual which you can hear on the recordings. Stubbornness can be seen as the main reason for this!

With this lineup, they recorded a 15 song demo tape which they self released. Playing mostly in Halifax, particularly at the new all ages venue, Cafe Ole. They started to gain popularity with their back to basics punk sound and strong female vocals. Then Mike quit the band to be replaced with Ian Hart who was also in a band called No Offense at the time.

After playing shows in Halifax with Submission Hold from Vancouver, they met Jason Flower (who was touring with Submission Hold) who did a record label. He liked what he heard and offered to do a split LP with The Chitz and a ska/punk band from Oregon called The Readymen. This split LP had re-recorded demo tracks on it, plus several new songs. Around the same time En Guarde records from Montreal agreed to put out a split 7″. Richard had worked with En Gaurde before in releasing a Shitheads/No Offense split 7″ (which is perhaps the first Nova Scotian punk 7″). This split would be with The Moaning Lisas – an all female band from Hampton, New Brunswick.

After having some vinyl releases under their belt the band expanded their touring to include other near by provinces such as New Brunswick and Prince Edward Island. There was also the only “tour” they ever embarked on which was basically just Montreal and Toronto. There was also a show in Burlington, Ontario where the band played with suburban emo bands that were popular at the time. Needless to say, the band did not go over so well at that show. The other shows went much better. Also, around this time Ian moved out west and Louis Roberts filled in on bass. During this time, the band was featured as a cover story on local weekly mag The Coast. 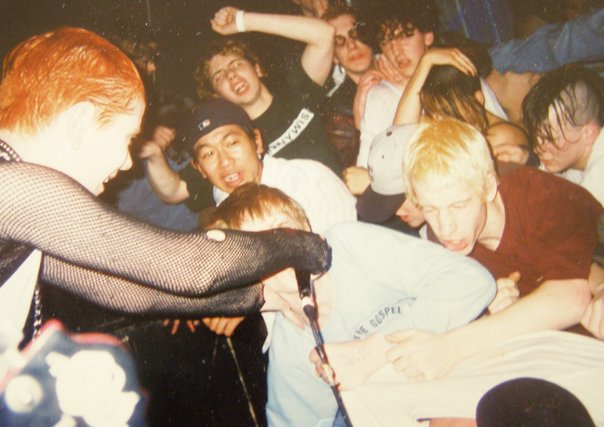 They also put out an LP entitled Break The Cycle, this time on Richard’s own label Sub Profit. 11 songs that showcased their evolving sound with a little more hardcore influence to it. A better recording also helped this to be what many would say is their best work. After some memorable shows around Halifax, including the final show at Cafe Ole, the band decided to call it quits, but not before putting out a final 7″…this time a split with Halifax’s grind/crust band Existench. 3 songs, recorded on a 4 track were definitely the most intense and abrasive songs the band recorded. The Chitz “last” show was in May of 1998 and was quite an event for the local scene.

It took a few years but in 2001 the band played a reunion…basically at the request of their friend Meghan who was moving away. They actually wrote 2 new songs for this show but alas they were never recorded (except on the video of the show). Richard did not play this show as he pretty much quit playing guitar after the last show in 1998, so Ian switched over to guitar and Louie played bass. And then nothing for 10 years. But on May 21st, 2011…yet another reunion show in Halifax, this time with friend Greg Hatt on bass. So with that in mind check out their entire discography:

Listen to the LP here: