No Offense was my first real band. I can't really remember when we first started, sometime in the early 90's and played until 1995. It all started when me (Ian) and my two friends Pat and Jon started jamming together. We all basically bought instruments right after high school in 1990 and starting playing in Pat's attic. I played guitar, Jon slapped the bass and Pat could already play drums so that was his instrument of choice. Our first attempt at recording was an instrumental cassette we made for the local college station under the name Street Lethal. It was not good. Then we recorded 6 songs, this time with vocals under the name Total Confusion. It was slightly better. We never released anything or played a show. Jon decided he didn't really want to perform live so we got a guy named Jake Dambergs who we knew from shows to play bass. I'm thinking we played a few open mic nights with this lineup as well as recording a song for a local tape compilation called Mass Turbulence.  It was then decided that we should get a an actual singer so Alfred Wooley from the 80's hardcore band False Security was recruited. Then he suggested getting Jimmy MacKenzie also of False Security for 2nd guitar. We agreed and that became the lineup!

We started playing shows around Halifax, the first being at The Green Room at Dalhousie University. Having 2 older scene vets in the band helped us get some local popularity. We ended up playing quite a few shows around town at venues such as The Double Deuce & Pub Flamingo, but the all ages venue Cafe Ole became our regular spot! Then our friend Richard who had released the Mass Turbulance compilation asked us if we wanted to do a split 7" with local punks The Shitheads. We did. It was actually going to be released by EnGuard Records out of Montreal who were a fairly established label at the time. We recorded 3 songs for it and unfortunately I don't think the ended up sounding very good at all. It was my first time in any kind of real studio and we didn't really know what we were doing. And in retrospect, I don't think the song were particularly well written. We had better songs, but for some reason we didn't use those. I can't remember who recorded this but the un-matching dual vocals on the song Riot should not have been allowed. I always cringe when I hear that song. Luckily, The Shitheads side of the record was much better and people ended up buying it. It got a decent review in Maximum Rock'n'Roll as well. 1000 copies were pressed. It is actually somewhat difficult to find these days but I'm sure if you really tried you could track one down. 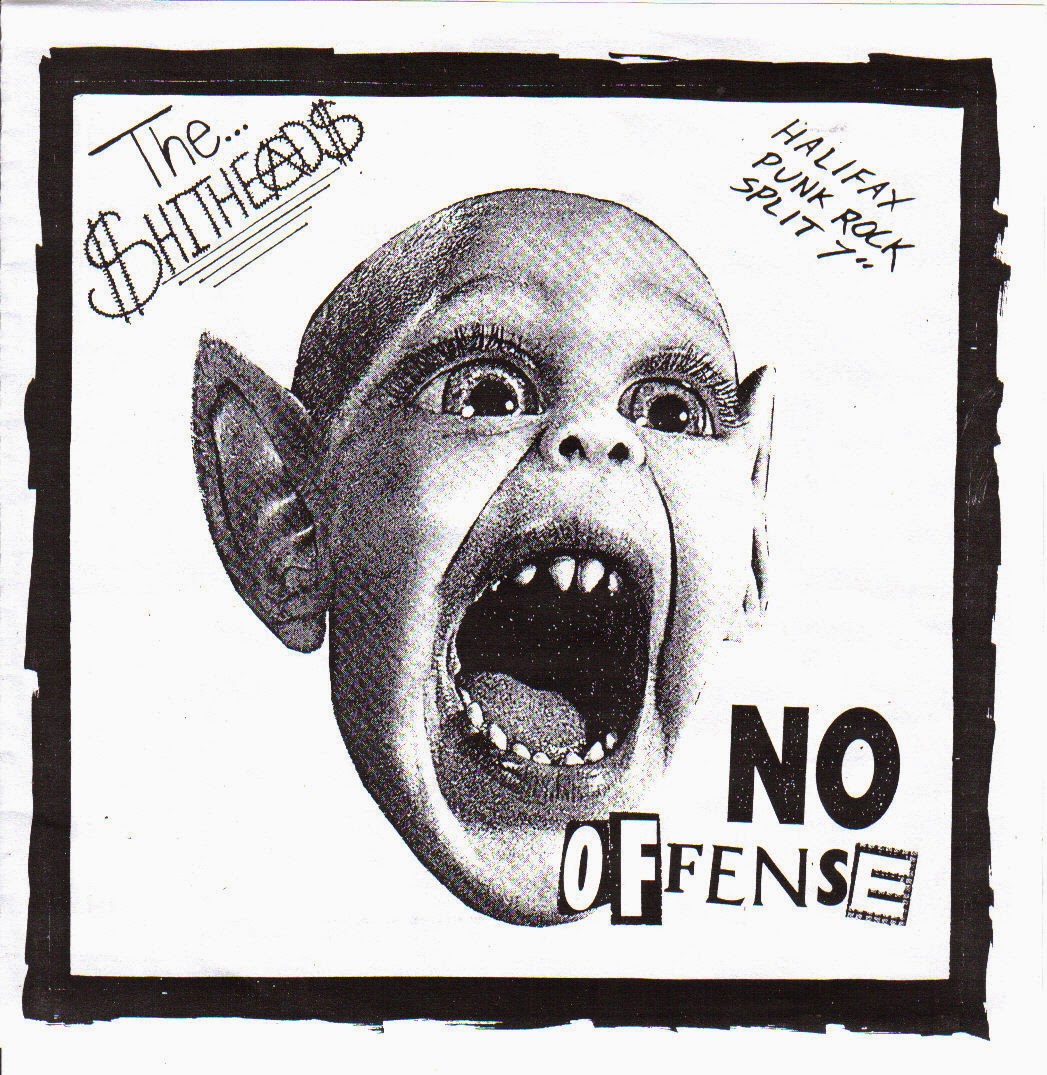 So maybe our recordings weren't so hot, but there is one thing about this band that I look back at fondly and that is going on a small tour. This would have been my first time doing anything like this. It was in 1994 and we played in Saint John, Montreal, St Catherines, and ended it off at Spiderland Punkfest in Ontario which was a fairly big deal at the time. We played with bands like Blanks 77, Toxic Narcotic, Submachine, Mob Action and tons more. Pat couldn't do the tour so we got Gerard Waters from The Quayhogs to fill in for him. We rented a mini van and hit the road for a week. We played at Foufs in Montreal with the Local Rabbits and got paid $13. The Spiderland Punkfest was the highlight as we played near the end of the night with the bigger bands for some unknown reason. It was definitely a learning experience and first of many tours I would eventually embark on.

We played around a bit more after that, but eventually it just fizzled out. We played our last show at Punk Fest 95 at Cafe Ole. I had joined The Chitz before that, so that became more of a focus. Pat moved to Switzerland but now lives in Ottawa with his wife and 2 kids. Jake played in a few bands after such as Relic but his whereabouts are currently unknown. Alfred and Jimmy both still live in Halifax but I don't believe they are actively musically. There you have it! The first of many bands for me. Again I don't think the songs were that good, but it was a fun introduction to playing in a punk band.


So now here are some MP3's of our recordings! I would suggest only getting the split 7" and studio sessions, but I put the other one up just in case you wanted to hear some other songs for whatever reason.

or just take a listen here:

Amazing! I've never been one for wallowing in reminiscence, but I really enjoyed this trip back in time. I have tons of great memories from the tour also, it was (and likely will remain) the only real tour I ever accomplished with a band. I've got piles of great memories from playing with you guys too, as well as some terrifying ones: the first open mic I played with you and Pat at the Flamingo when I sang / played bass for the fist time on stage and my knees were literally shaking so bad I dared not move, and the packed St. John show where the "promoter" took me to the basement to show how the the floor in front of the stage was collapsing and held up by a couple 2x4, so we were supposed to tell people not to dance (yeah, right). It never collapsed, but I remember I could see it bouncing under the weight of the crowd. That was a packed show and I think my favorite I ever played. I just wish I had looked in a mirror at least once over all the years I shaved my head, I look like Giger's Alien.

I used to love seeing you guys play. Along with the Shitheads and Deepwoods and Donner Party Reunion. Some of my favorite memories from life.

Hello Ian, I went to DHS, and remember Alfred Wooley well. I always wondered where he went and what greatness awaited him. Where is he now?