No Class was a cassette only compilation of local bands (not just punk, but a mix of genres (pop, grunge, hip hop). There are some good songs, and not so good songs. Bunk was one of the stand out tracks and they got quite popular at Cafe Ole around this time. One of Plumtree's earlier songs as well! It was released by No Records around 1993 and compiled by Chris Trowbridge and Waye Mason. Let's hear what they have to say about it! 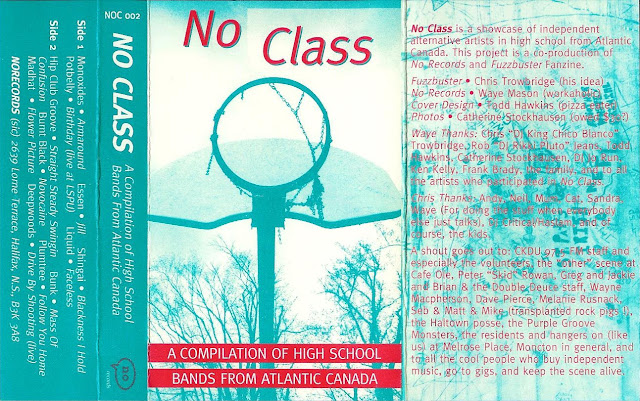 Chris: Been awhile but as I recall it all started with an episode of Fat Albert. One of the characters says "you're like school in the summertime... no class". I used that dialogue on CKDU as the intro to the Motörhead song No Class. And suddenly I realized that I should do a compilation of high school bands called No Class. Many of these bands were dropping off tapes at CKDU at the time, my favorite of whom was Bunk from Dartmouth. Cafe Ole had just opened I think so there were already a bunch of bands around. We just asked for bands to submit songs on CKDU and word of mouth. I remember trying to talk someone into putting up some money - later found out they thought I wanted to do a compilation of high school marching bands. Waye ended up doing all the hard work.

Waye: Basically if the majority of the band was in high school we put it on there. None of it was really bad, some of it was really good. Chris T and I currated it together. I have a DAT and I have one side of the tape in mp3s, the guy who copied them didn't understand there was a 10 minute gap and then the other side started! 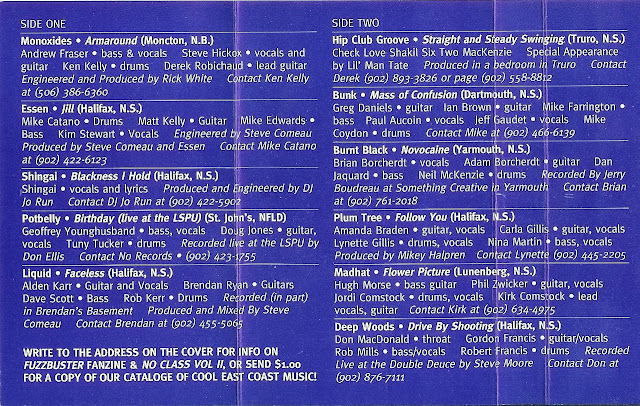 You may also notice there is a song on here (Track 6) by the Tim Robbins Experience that is not listed on the cassette cover. This is actually Thrush Hermit (or at least most of the band). Chris explains "As I remember it, the Thrush Hermit guys didn't want to be identified as a "high school band" at that point, even with their side projects.Or maybe it was even a contractual thing? Could they have been signed to a major already by that point? Maybe they had a publishing deal or something.

Thanks to Stephen Cooke for digitizing this tape!

LISTEN TO IT HERE: