I will be honest....I think FYM is the best band to ever come out of Halifax. I'm sure it has a lot to do with being friends with them, watching them jam and seeing their shows. FYM started out in 1996 when a few friends decided to get together and write some punk songs about skateboarding. I don't think anyone in the band would argue that the mastermind behind everything was singer/guitarist Selwyn Sharples. Joining Selwyn was Damien on drums, John on guitar and Chris on bass. Even though they were all still in high school it became pretty evident that they had a serious knack for writing catchy songs. The following is an interview done with Selwyn in 2015. Damein also has a bit to say that the end. I've included downloads of everything the band officially recorded plus some never before heard songs!! Ladies and gentlemen...I give you FYM!


When did the band start? Why? Who was in it at first?

Sometime around ’95 many fun-loving bands were forming and performing at the downtown all-ages club Café Ole. Maybe it was because “metro’s only club for all-ages” was municipally supported and accessible to us. Condon MacLeod and Gary Beazley made that club happen. Damien (our drummer) worked there at the time. Skateboarding was another point of connection between the original line-up of Chris Meagher, John McCullough, Damien Nee and Selwyn Sharples.

Maco:  I remember going to the show that caused them to kick out their first bass player. He was too drunk to play. I think I offered to play bass for them at that show!


When did that old bass player guy leave and how did you get Maco in the band?

Not long after our first show and through the fabrication of strategic dichotomies is my short answer to the question of how Mackenzie Ogilvie came to replace Chris Meagher on bass.


What are some fun show memories you have?

- Being underage; the best way to experience a bar.
- Playing shows at skateparks and the odd naval vessel thanks to Jackie Dexter and Mike Grey.
- Dancing to the Wankin’ Family was many a good time for a dangerously Oi sounding band.
- Playing house shows (ex: Meghan Merrigan’s birthday at her parent’s place in Clayton Park).
- Enjoying the revolution as the band PIGGY took prisoners including my sister and myself.
- Filling-in whenever possible (is still a remarkable form of support for musicians to express).
- Appreciating the unique atmosphere of the Bike Shop Café thanks to Tony and Marty.
- Noticing the band BAD LUCK # 13 and how the singer BATMAN would always ask the young audience “what the fuck are all you little cocksuckers waiting for?!” followed by some self-deprecating remark about age.
- Interpreting those words in two ways:
(both)
1. dance now
(and)
2.  start your own fucking band

Tell me about recording the 7"

Q: If a band plays in a remote region without releasing a 7” does it make a sound?
A: Yes, thanks to the internet (not so much in ’96).
Together we ate take-out fast food in an off-gassing room. Recording and the supportive environments that can be a part of this cultural ceremony are like birth and death. It has been my experience that the most pronounced forms of support seem to spring up around the recording process. To be among friends while recording is both a privilege and an advantage. Much appreciation to all those who participate in this culture of mutual-aid. Thanks again to Andrew at Sustain and Richard Lafortune.
Did you play much out of Halifax?

No. When we did travel it was with the help of [the interviewer] or another friend with a driver’s license. Those precious few drivers included members of the bands Fear & Loathing, The Chitz, The Shysters and Absolutely Nothing. Parents would occasionally drive us around. THANKS AGAIN!


You had quite a few songs that were never recorded...some earlier and some later songs. Talk about them!

What makes a song a song? Acknowledgement?
An initial burst of material was the result of us all hanging out with one unplugged guitar, paper and a pencil. Those early songs were an honest reflection of who we were; young, insecure, afraid of women and obsessed with skateboarding. The collective approach was short-lived.
Songwriting gradually centralized and moved behind closed doors (of my bedroom) with Ian Hart or Derrick Hiltz holding down a thrash beat while my visions crystallized. Can’t thank them and my parents enough! This experience was far more common than practicing with the members of the band. There was a sense of being in the studio with a trusted friend. The support was mutually expressed (with drums) and the writing took flight in the form of a troubleshooting two-piece. We worked on songs for various bands. This particular mode of song production is still a favorite recipe.

This video has a few unreleased songs:


Why did the band end?

Bands end. Most bands only end. Just ask a person who likes the idea of being in a band. That band dragged on with some encouragement from a few dear friends [interviewer] included. My hope is that the band ended because we were all moving along with new and exciting projects. Letting go of attachment was involved. This question has at least three more answers. 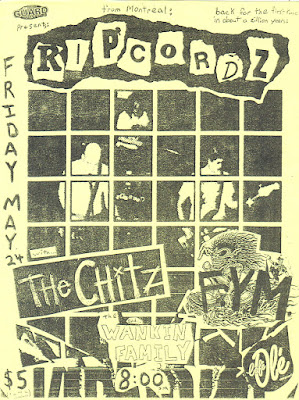 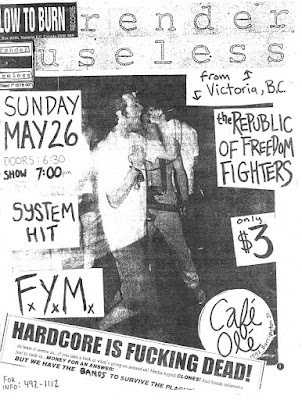 What have you been doing musically since then?

- Running from my own tyranny through various musical forms. It follows me.
- Replacing control with surrender in the context of co-creating music.
- Getting involved with the SAD RAD collective (highly recommended).
- Coming out of a long era of self-imposed obscurity.
- Reconnecting with that bedroom jam vibe as much as possible.
- Currently playing with: NOISE POLICY, HALF//READ, EGOSYSTEM, T.V.P.(Tribute Von Piggy) and too many one-offs to list (see: recordingclub.h-a-z.org).
Improvisation is a fetish. Analog recording is an unconscious habit. Beyond the puddle of songs that were never recorded grows a vast body of recordings that were never songs. My recent work (if you can call it that) is a tumbling tower of well-documented mistakes. Some of us have the privilege of taking band culture for granted. Are we beginning to approach what this means?


Looking back, what are your thoughts on the band? Did you wish you had done more, toured, etc or are you happy with how it turned out? 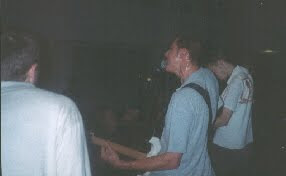 Don’t look back. Look forward to granting me these three wishes:
1. Say "NO" to two decades of my own thoughts on that band. Let it go.
2. Include all members of that band in this interview process. WTF?!
3. Stay present in creating music, recognizing the traps of nostalgic band culture and consumerism.

And finally...when is the reunion show?

You ask as if it might happen? -My recent punking must look promising! The simple act of playing in punk bands represents a reunion indeed. The F.Y.M. reunion show however, is not where punk finds me.
"You can't be what you were..."

At least we have videos to remember the band by. Like this one where FYM played on a Navy ship. CKDU FM was doing a funding drive and one of the prizes was having FYM play a show at a location of choice. The person who won worked in the navy and decided to have the band play on the H.M.C.S. St. John's. So about 20 punk type folks met at the gates of the navy base and were escorted onto the ship carrying gear and set up in a small mess hall. I wasn't sure if you are allowed to film on a navy ship so I tried to keep the camera hidden while taping this. It's pretty dark and bass heavy as a I was standing near the bass amp (though you can really hear Mac's bass prowess!!)

Drummer Damien Nee chimes in with his own memories on the band:
For whatever reason, and there are lots of reasons, my memory isn’t very good.
Ian asked me if I had anything to say about FYM for a blog post he was doing.  I said I did but I’d have to think about it.  I’ve been thinking about it for a looong time. So long that Ian had to get on my case about it.
There’s an episode of Seinfeld where George complains about how he always seems to bomb at staff meetings after getting a couple laughs at the beginning. Jerry suggests that he use the old “showmanship” trick; get a laugh from the audience, then leave on a high note.
George gets a laugh 30 seconds into the next staff meeting… then walks out.
I haven’t played any music since the last FYM show in 1997.  Or maybe it was 1998…  FYM was my high note.
Ian said I should talk about some fun shows we played, but the thing is, they were all fun.  Particularly any show we played with The Juveniles.  They were probably the most “fun” band in our scene at the time I think.
The most memorable times for me playing with FYM were the practices.  We practiced in what was arguably the world’s smallest practice space, Selwyn’s bedroom.  If it was 8 foot by 10 foot, I’d be surprised.  It had all the regular stuff you might find in a teenagers bedroom; bunkbed, chest of drawers… but there was also a drum kit, 3 small amps and a little P.A.  The room just fit the four of us, as well as the occasional guest.  It was so loud in that little room… I regret nothing, except maybe the tinnitus.  When we took breaks, we would skate the worlds tightest backyard mini-ramp.  It was amazing that Mr. and Mrs. Sharples let us practice in their house twice a week.  Sometimes we were even invited to stay for dinner.  As a parent, I’m not so sure I’d put up with that kind of noise between work and dinner.
The last show we played was one I’ll always remember, not so much for the show itself (I’m fairy sure it was one of the “Uncle Sucko” shows that Mike and Jackie put on in Bridgewater), but for how it ended.  After the show, we all went our separate ways back to Halifax, but for some reason, Johnny, Peter Hall, Dave MacLeod and I ended up in Lunenburg where we got caught poaching a swimming pool at a cottage owned by a rather upset older lady who thought we were with her son.  We weren’t.  By this time we had had a few too many and decided to sleep on a beach and ate some canned beans that John had brought along for some reason, earning him the nickname “Johnny-Bean”, which stuck.
That was my George Costanza showmanship moment, my musical high note.
Playing music at that time in Halifax was pretty special.  It is definitely one of the best times of my early life (so far).  The story wouldn’t have been the same without even one of the many characters.   I’d especially like to thank Condon for giving a generation of young punks a venue to make a big load of trashy old noise, Selwyn for the brilliant music of a genius and Richard for preserving it in wax.
And of course John, Maco and Chris Mars-Attacks too.

* In retrospect, the last show I played may have been a Killer Beez show, but I'm pretty sure I only ever played in Bridgewater with FYM.


Now you can listen to their 7" plus some bonus tracks here: 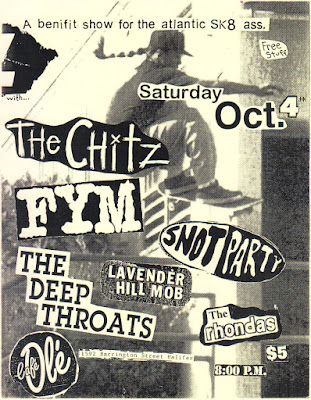 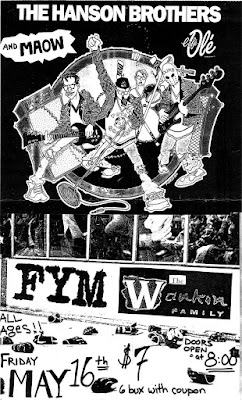 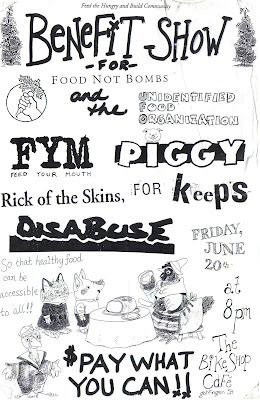 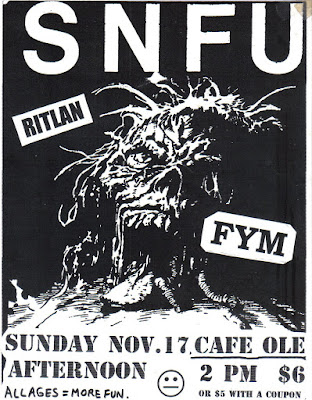