Back in 2001, long time Halifax scene member Louie Roberts released a CD of local punk bands. This is his story. Download at the end.

Why did I do it? That’s a tough question. There were lots of reasons I suppose. The first proper answer would be to contribute to the local punk/hardcore scene. I wanted to showcase the bands that were active at the time. The idea and inspiration first came to me after a break-up with a girlfriend. I needed something to do to keep myself busy and my mind off girls at the time. There may have been more selfish reasons in there as well.  Ego? Maybe... Wanting to be someone who did stuff and make things happen.... But let’s stick with the official line, I did it for the scene.

I can’t remember exactly how, but Waye Mason running his No Distro at the time got wind of the comp, and got behind it. Things would have been much different if he didn’t come along. He had I think 500 copies manufactured. I got 100, and got rid of most of them at the CD release show at The Pavilion. I set it up so that you got a copy with the price of admission to the show. Waye wasn’t happy with that, as everyone who would actually want a copy got one that night, and that didn’t help local sales. Whoops.

The bands that ended up on it were pretty much the bands in the scene that were most active, that were able to provide a song or two that sounded somewhat decent. There were a couple additions that were favours.  Drunk Again by the Dynamics. Brendan, was always in a band, but never seemed to ever play shows. He helped a lot putting things together for me, digitizing most of the music, so I put them in. The Burdocks song The Chase was another favour. I don’t think anyone ever accused them of being punk or hardcore. I worked with Seth at Mikey’s at the time, and he was pushing to get the Burdocks on the CD. I told him if they wrote and recorded a punk song, I’d include them. I never expected them to actually do it, but they did. In hindsight that band always got shit done, so yeah it shouldn’t have been a surprise at all. They were the only band who wrote an original for the CD, and as far as I know never put that song on any other release either.  Seth ended up helping out with the final design and artwork on the CD as well. I didn’t have the means, talent or creativity to come up with anything. Brendan and I threw something together really quick and it was just awful. I think it had a map of the east coast and a pic of a guy playing bagpipes. So bad. I brought it to Waye who thankfully convinced me how terrible it was, and suggested Seth as someone who could help come up with something. The hardest part of the whole process was coming up with the final art and design, but it turned out really nice and very much in Seth’s art style. It worked. Seth was always awesome and still is. 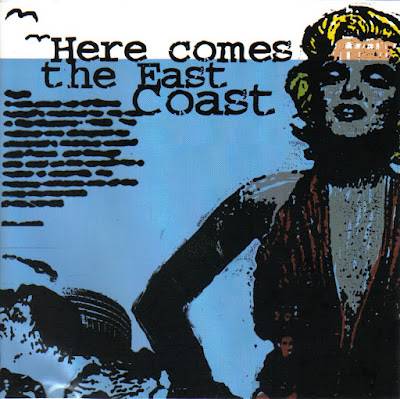 I haven’t listened to the comp in quite a while. In probably 10 years or more. My favourite songs on the CD are Who by Nothing to Say, and Meet me at the Drive In by The Lewinskys.  Here comes The East Coast never sold a ton of copies, or got amazing reviews, but for me where it does succeed is that it captured the scene at the time, helped my ego, and got me over a breakup.

Other links of varying use:
Discogs Entry
Exclaim Magazine review
Posted by Unknown at 11:20 AM